Every spring, in April or May, the Bellet appellation of Nice hosts its new vintage tasting. The tasting is important for the vineyards keen to show the wines currently available to the regions sommeliers and wine shop owners as well as journalists.

Luckily, in a spring marked by cool, wet days, the weather remained perfect – bright blue skies, sunny but not too hot.

2013 marked the 20th anniversary of the creation of the appellation of Côteaux Varois on 24 March 1993. Twenty years ago many producers were disillusioned by the difficulties in selling their wine with a mere VDQS status, and many were grubbing up their vineyards. The creation of the appellation validated their place in the ranks of Provençal wines of quality. Over the past twenty years, the wines from this northerly Provençal appellation have forged a distinctive character reflecting the cooler climate. Fresh fruit, acidity and elegance mark the better wines. The red wines are generally dominated by Syrah.

The unseasonally cold and wet weather meant that, unfortunately, the tasting was held under a large white marquee, so the beautiful cloisters of La Celle were not visible during the tasting.

This made it more pleasant to taste professionally – not too hot nor too cold – but meant that it felt more like an English summer fête than a Provençal garden – there is something very distinctive in the atmosphere of damp grass and crowds under plastic canvas.

Canapés served up by the Alain Ducasse restaurant 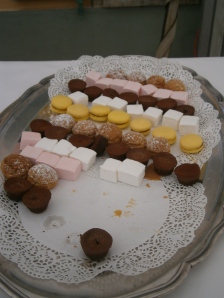 One of the dessert platters

As usual, the atmosphere at the Côteaux Varois tasting makes it one of the more pleasant and friendly tastings. The relatively small number of producers (43) exhibiting meant that tasters were not overwhelmed by an impossible number of stands to visit, and even if not all wines were tasted, it was possible to talk to many people.